We are a Messianic Jewish congregation located in Los Angeles who believes that Yeshua (Hebrew for Jesus) is the promised Jewish Messiah. If you are in the Los Angeles area, we invite you to come to our Saturday service onsite. If you are not in our area or unable to make the onsite service, we invite you to watch our Shabbat service LIVE online every Saturday from 10:30 am to 12:30 pm PDT. or watch the recording later on our YouTube channel.

We have Onsite, Inside services in the sanctuary at West Hills Church.

In light of the health challenges around us, we encourage everyone to do all they know God wants them to do to be in as good of health as possible, such as eating properly, having a proper BMI, and taking vitamins (like A, C, D, Zinc). If we can help in any way with this, please let us know.

If you are in the congregation and exhibit any possible symptoms of Covid, please let us know as soon as you can, so that we can pray for you. We believe in the value of prayer for God’s healing. We are not doctors and don’t give medical advice, but also we want to be sure you are aware of certain therapeutic things that might help you in your situation. If someone gets Covid, the earlier that it is treated properly, the better.

We value your participation in our services! We want you to come and enjoy worship, ministry, and fellowship. Therefore, for the sake of the health of the congregation and to do our part to prevent further spread of Covid-19, we are asking those individuals who feel under the weather, exhibiting Covid symptoms or have been exposed to Covid-19 to stay home and watch us on the live stream. Thank you for doing your civic responsibility. We look forward to seeing you in the future.

Adat Yeshua Ha Adon is a welcoming congregation to the public.

All people with good intentions are welcome to come and hear about Yeshua’s (Jesus in Hebrew) life-giving gospel message of love, forgiveness, and eternal life.

Letting people attend our services in no way indicates agreement with, nor acceptance, of any sinful, controversial views, or lifestyle they might have, neither are we responsible for comments that they could make outside of our gatherings.

If you are unable to attend the onsite Adat Yeshua Messianic Congregation service:

Watch the Saturday Service Live 10:30am till around 12:30 pm PDT each Saturday (or the Recording later)

You can watch the Livestream at 10:30am with the Torah Service (with most of the Jewish liturgy) until around 11:00am, followed by the Shabbat Celebration Service with Shema & V’ahavta, Live Worship Music (with the words), and the weekly sermon around 11:30am until 12:30pm LIVE on Saturdays from any computer or mobile device (or watch them later on this website or on our Facebook page or Youtube channel.) 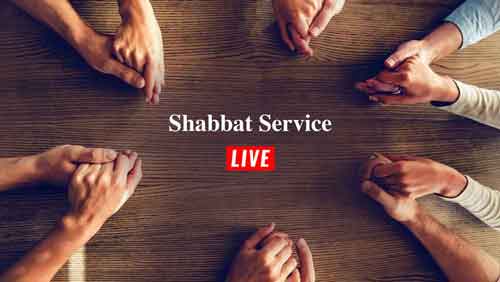 We provide a Messianic congregation where those who are Jewish or have families who are Jewish can continue to live out their Jewishness but with faith in Messiah Yeshua. Also, we provide an opportunity for both Jews and non-Jews alike to learn about the Jewish basis of our faith in Yeshua. As well, we provide a gathering for those with a love for our Jewish people and the modern-day state of Israel and who want to see them  be blessed by coming to know and follow Messiah Yeshua. 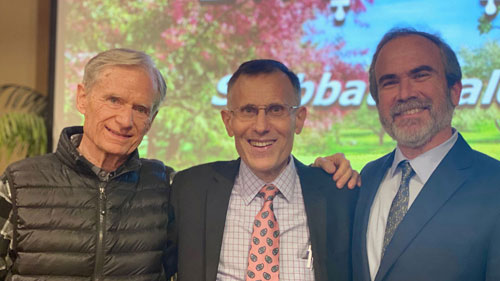 Michael H. Brown came to Adat Yeshua in 1992 as Messianic Pastor. He is from a Reformed Jewish background and is a graduate of Dallas Theological Seminary with a ThM (Master in Theology).

Michael Cohen – Michael and his lovely wife Lisa are both Jewish and have been involved in Jewish ministry for over 26 years. Michael is the LA Director of Chosen People Ministries. He has been involved with Adat Yeshua since he came to believe in Yeshua in 1993. He is from a Conservative Jewish background and is a graduate of Moody Bible Institute with a Master of Arts in Jewish Studies. Lisa has a Master’s degree in Jewish ministry from Fuller.

Danny Sciupac – Danny and his lovely wife Ely are Ashkenazi Jews originally from Argentina. They made aliyah and lived in Israel for a few years, and then moved to the US. They became believers in Yeshua on the same day, June 1, 1997, through Adat Yeshua’s ministry. They have been married 51 years and have a burden to see couples having good, successful marriages, so they lead a Marriage Relationship ministry in the congregation.

At our Messianic Jewish Congregation, s Deacons and Deaconesses and leaders of various ministrieo assist the Elders.

Reach people for Messiah Yeshua (Kiruv) to the Jew first but also the Gentile, both locally and beyond.

Develop mature, reproducing Messianic disciples (Talmidut) in community with one another and in Havurot.

Establish a vibrant, worshipping, Messianic community (Mishpochah) under the New Covenant (B’rit Hadashah) which is a witness and minister of good works for Messiah Yeshua in society.

To be a gospel-centered, Havurah planting, Messianic congregation under the headship of Yeshua, that is elder-led, community-driven, and organized by the gifts of the Holy Spirit, in order to make disciples, one in Messiah, who proclaim the Gospel of Yeshua to the Jew first and also the Gentile for the glory of God.

Adat Yeshua is an outgrowth of a weekly bible study meeting back in the 1980s by Jews for Jesus in the San Fernando Valley. Adat Yeshua was organized as a separate, independent Messianic Jewish Congregation on May 6, 1988. The congregation met in Van Nuys for its first 8 years, then met in Woodland Hills for 12 years, and since then has met in West Hills.

We believe: that the Scriptures of the Tanakh and B’rit Hadasha [= Old and New Testaments] are divinely inspired, verbally and completely inerrant in the original writings, and of supreme and final authority in all matters of faith and life.

We believe: that the Scriptures of the Tanakh and B’rit Hadasha [= Old and New Testaments] are divinely inspired, verbally and completely inerrant in the original writings, and of supreme and final authority in all matters of faith and life.

We recognize: the value of traditional Jewish religious literature, but only where it is supported by, or conformable to, the Word of God. We regard it as in no way binding upon life or faith.

We believe: in one sovereign God, existing in three persons: Father, Son and Ruach HaKodesh [= Holy Spirit], perfect in holiness, infinite in wisdom, unbounded in power, and measureless in love; and that God is the source of all creation and that, through the immediate exercise of His power, all things came into being.

We believe: that God the Father is the author of eternal salvation, having loved the world and given His Son for its redemption.

We believe: that Yeshua [= Jesus] the Messiah was eternally pre-existent and is co-equal with God the Father; that He took on Himself the nature of man through the virgin birth so that He possesses both divine and human natures. We believe in His sinless life and perfect obedience to the Law; in His atoning death, burial, and bodily resurrection, ascension into heaven, high priestly intercession, and His personal return in power and glory.

We believe: that the Ruach HaKodesh is co-equal and co-eternal with the Father and the Son; that he was active in the creation of all things, and continues to be so in providence; that He convicts the world of sin, righteousness and judgement; and that He regenerates, sanctifies, baptizes, indwells, seals, illumines, guides and bestows His gifts upon all believers.

We believe: that God created Man in His image; but that because of the disobedience of our first parents in the Gan Eden [= Garden of Eden], they lost their innocence and both they and their descendants, separated from God, suffer physical and spiritual death; and that all human beings, with the exception of Yeshua the Messiah, are sinners by nature and practice.

We believe: that Yeshua the Messiah died for our sins, according to the Scriptures, as a representative and substitutionary sacrifice; that all who believe in Him are justified, not by any works of righteousness, but by His perfect righteousness and atoning Blood; and that there is no other name under Heaven by which we must be saved.

We believe: that Israel exists as a covenanted people through whom God continues to accomplish His purposes, and that the Body of Messiah [ = Church] is an elect people in accordance with the B’rit Hadasha [= New Covenant], comprised of both Jews and Gentiles who acknowledge Yeshua as Messiah and Redeemer.

We believe: that Yeshua the Messiah will return personally in order to consummate the prophesied purposes concerning His Kingdom.